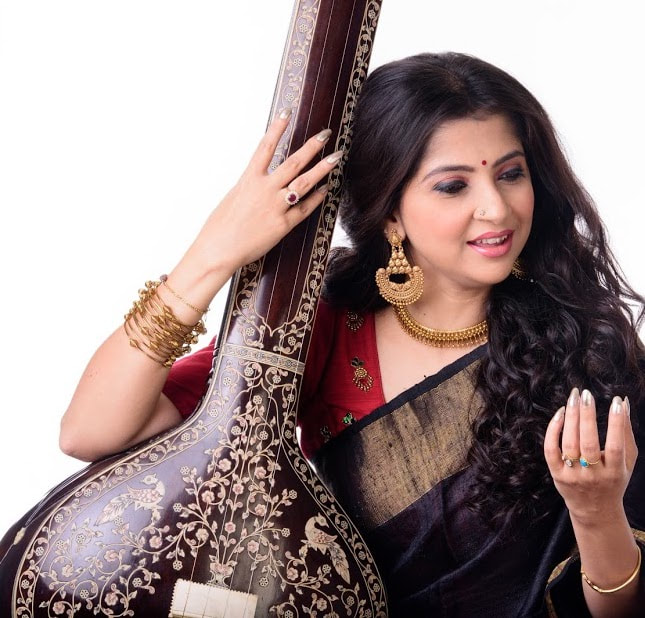 Artists :
Vidushi Kaushiki Chakraborty is today one of the leading Indian classical vocalists and the daughter of Pt. Ajoy Chakraborty. Groomed at Sangeet Research Academy, she is today considered the torchbearer of the Patiala gharana.  From the age of two she exhibited a keen interest in music. She accompanied her father in his world tours of music performances and sung her first song, a tarana, at age 7, at the Calcutta Rowing Club. At age ten, she started learning Indian classical music at the academy of Jnan Prakash Ghosh who was also her father's guru, later joined ITC Sangeet Research Academy from where she graduated in 2004. Vijay Kichlu, director of the academy fine tuned her skill in rendering Khyal. She also trained under her father at his Shrutinandan school of music in Kolkata.  ​She has not only specialized in rendering of Khayals and Thumri but she has also learned South Indian Classical music from Dr Balamurali Krishna. She has won many awards and has performed widely in prestigious festivals such as Dover Lane, Sawai Gandharva, ITC Sangeet Sammelan etc. as well as across the globe.

Debjit Patitundi is a young tabla maestro. He took up the instrument aged four, learning first under his father Amal Patitundi and then from his father’s guru Pandit Shankha Chaterjee. Their fruitful decade spent as guru-shishya (master-student) saw Debjit win various competitions, including All India Radio's 2009 Tabla competition, and appear frequently on national TV.  He soon became one of All India Radio’s youngest ‘A’ grade Hindustani percussionists, and recently has represented his country internationally, travelling to Spain as part of an Indian cultural delegation and making his London debut in 2018. Debjit currently receives advanced instruction from eclectic maestro Pandit Subhankar Banerjee.

Sarwar Hussain received training in Sarangi under the tutelage of Shri Abdul Lateef Khan and has imbibed the family tradition of playing the Sarangi from a young age. He has performed widely within India at prestigious venues including the National Centre for the Performing Arts (NCPA), Mumbai, the Saptak Samaroh, Swar Samaroh, SNA, Sur Singar Samsad’s Kal Ke Kalakar, Tansen Sanmaroh, Ustad Allauddin Khan Sangeet Samaroh etc. He has received many awards including the Laxmi Bala Samman conferred by the All India Radio, Bhopal and title of ‘Sur Mani’ from Haridas Sangeet Sammelan, Mumbai and has many recordings to his credit.

Gourab Chatterjee is one of the best young Harmonium accompanists of India and a very versatile artiste of Hindustani Classical Music. He learnt vocal music from the eminent Gurus like Shree Jainul Abedin, Late Pt. Sunil Bose and then after joining ITC SRA he started learning from Pt. Arun Bhaduri. With his natural gift of playing Harmonium he started playing with all the vocalists and became so popular within a very short time. He has accompanied with the stalwart musicians like Pt. Ajoy Chakrabarty, Ustad Rashid Khan, Pt. Ulhas Kashalkar, Vidushi Girija Devi, Vidushi Kaushiki Chakraborty and many more in India and USA, Canada, Europe, Middle East.